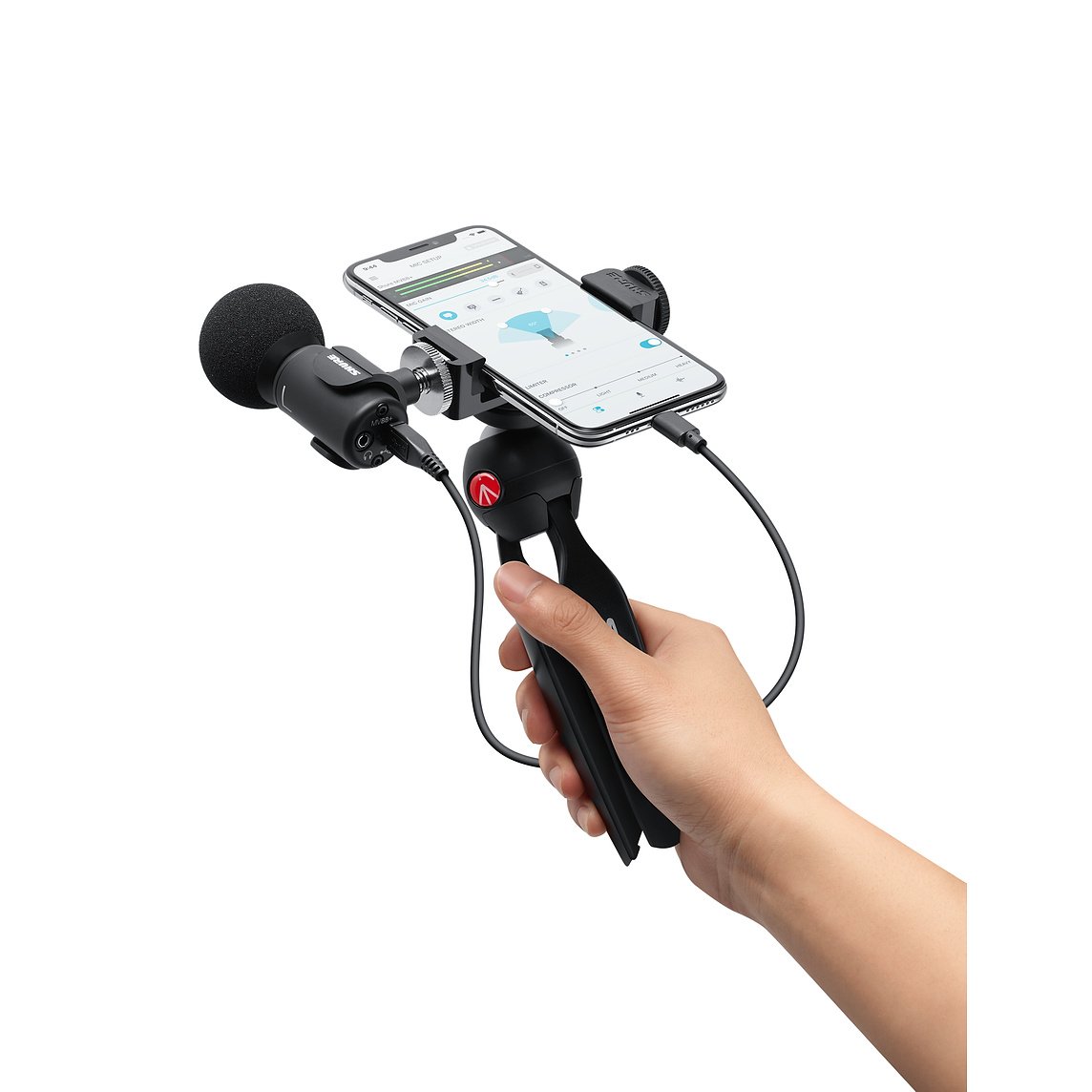 The Shure MOTIV MV88’s great sound and immense versatility have made it one of the most popular mobile mics. Now, the next-generation MV88+ takes iOS integration and audio quality to a whole new level. The MV88+ captures sound that’s clean and clear, whether you’re inches away from the source, recording an interview in a noisy environment, or laying down a new song idea with your favorite couch guitar. Multiple capsules let you record in variable cardioid, figure-8, and mid-side stereo (among other) options, which you can access from the free ShurePlus MOTIV iOS app.

Shure’s MOTIV MV88+ may look like a lot of other iOS mics, but its combination of amazing sound and phenomenal versatility has made it one of the most popular mobile mics among the staff here. For starters, the MV88+’s sound is clean and clear, whether you’re inches away, recording an interview in a noisy environment, or sitting back on your sofa and laying down a new song idea with your favorite couch guitar. Multiple capsules let you record in variable cardioid, figure-8, and mid-side stereo (among other) options, which you can access from the free ShurePlus MOTIV iOS app.

One of the coolest things about Shure’s MOTIV series hardware is the flexible DSP onboard. While some devices let you recall multiple presets from their control panels, the ShurePlus MOTIV iOS app lets you access their entire DSP engine. From the ShurePlus MOTIV app, you can dial in your MV88+’s gain structure, add compression and limiting, and fully adjust the frequency response via a graphic EQ. The ShurePlus MOTIV app also makes recording in iOS easy. The interface is simple yet effective, editing is remarkably fast and intuitive, you get full 24-bit/48kHz digital resolution, and compatibility with Dropbox and other export options streamline the rest of your creative process.

Available to all MOTIV users on iOS, the MOTIV Video app is your one-stop solution for premium video and audio capture. It features all the functionality of the MOTIV audio app, like gain control, EQ, and compression. On-screen audio metering helps you keep signal levels in the optimal range, and you can choose from WAV, AAC, or ALAC audio formats. And depending on your device, you can choose from 720p, 1080p, or even 4k video resolutions.

Whether you’re creating music, gathering news, podcasting, vlogging, conducting interviews, or applying your mobile device to any other recording task, your Shure MV88+ delivers the top-quality sound you need. When you need the highest-resolution audio you can get, turn to the dedicated ShurePlus MOTIV iOS app, where you get access to a full 24-bit/48kHz.Multi-Platform iOS recording experts love that you can program your MV88+ from the app and then take those settings into any other app, including your favorite video apps or iOS DAW. Lay down layers of music tracks in Cubasis, capture pristine audio for video in Pinnacle Pro, put together world-class podcasts in bossjock — it’s all at your fingertips with the Shure MOTIV MV88+.